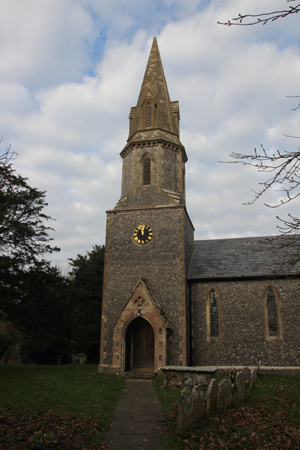 Lower Hardres was formerly known as Nether or Little Hardres. The Manor of Nether, alias Lower Hardres was at the time of the Doomsday Book, part of the possessions of Odo, Bishop of Baieux. The Domesday Book records his estate as consisting of a church, eight servants and thirteen acres of meadow.

The earliest records of registers referring to St Mary’s, Lower Hardres are dated 1563.

The original St Mary’s Church had fallen into a state of disrepair, when a parishioner, James Tilliard, left £2,000 in his will enabling the village to demolish it and replace it with a new church. In 1830 the new St Mary’s Church was built, incorporating the original font.

The font is very ancient (1217) and is one of only two if this type in Kent and is made from Bethersden marble.

The Friends of Lower Hardres Church

The village of Lower Hardres values its church. It is surrounded by beautiful countryside, fields to the north and bluebell woods to the east. We are fortunate in having our spacious churchyard, visited by so many each year and tended regularly by our band of enthusiastic gardeners. This offers a perfect place for quiet contemplation.

The aim of the Friends Group is to work together, meet friends and neighbours and raise money to ensure that this find building is still dominating the centre of our village for many generations to come.

In 2003 the group raised in excess of £50,000 to carry out necessary repairs to the spire and internal plasterwork.

The east windows, which had been boarded over since about 1940 were uncovered in 2005 to reveal the most magnificent stained glass windows which have transformed our church.

After some years of being inoperable we were extremely pleased that the church bell was brought back into operation just in time for the Armistice Day centenary commemorations.  This meant that we could join with churches and cathedrals in villages, towns and cities across the country in support of the Armistice 2018 centenary event and in memory of all those who gave their lives in the First World War.

During the recommissioning of the bell we learnt more about the history of St Mary’s Church, which is a Grade II listed building designed by the architects Rickman and Hutchinson and which was rebuilt in 1832 in the early English style.  Funding for the new church was provided for in the will of  James Tillard esq who is buried in the church alongside his wife Mary.

The new church replaced an earlier 12th century construction. In 1543, the church of St Mary de Castro, Canterbury sold 3 bells to the Lower Hardres church for £4, but by 1743 only one bell remained.  This single bell had been recast in 1723 by Richard Phelps who at that time was master of the Whitechapel Bell Foundry in London.

In 1800 Edward Hasted described the old St Mary’s Church as “small and dark, consisting of two isles and two chancels, having a low pointed steeple at the west end, in which hangs only one bell”. (The History and Topographical Survey of the County of Kent. Vol 9.  Edward Hasted).

As part of the rebuilding of St Mary’s in 1832 the bell was once again recast by Thomas Mears II – also master founder at the Whitechapel foundry.  The bell is inscribed “T Mears of London Fecit 1832”, weighs approx. 5cwt and has a diameter of 26”.

For your Sat Nav, please use the postcode CT4 5NS.